Jeff Ward is a semi-sought after campaign manager/coach, a well-regarded 15-year journalist who’s covered a slew of political campaigns, a radio show host/podcaster, and an author. He’s the founder of Forward Communication, a company that helps candidates avoid the typical campaign pitfalls and boasts an 80 percent track record of getting major city mayors, county chairmen, sheriffs, state’s attorneys, judges elected.

Jeff leveraged those experience into his recently released book, ‘So You Want to Win a Local Election,’ a step-by-step manual that’s just like having a campaign manager in a box. SYWtWaLE covers everything from ensuring your spouse is onboard to effective messaging to how to get yard signs into frozen ground.

Jeff’s political career kicked off as an 8-year opinion columnist for the then Chicago Sun-Times suburban newspapers and he continues to write at TheFirstWard.net. He was the driving force behind and 5-year co-host of the ‘Ward & Jones’ radio talk show out of Elgin, Illinois.

Jeff is currently working on The First Ward Report Podcast, striking fear into the hearts of misbehaving Illinois politicians everywhere (there’s a never-ending supply of ‘em), and working on his second book, ‘The Diary of a Curmudgeon.’

Buy The Book – ON AMAZON 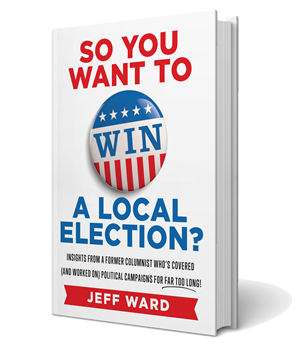